In my view, the rout in EM currencies is due for a sharp technical reversal.

Gold used to perform the role of the absolute measure for the value of currencies defined as a weight in gold, but that has not been true since 1971. You can still get gold quotes in various currencies, but forex traders, government officials and central bankers all but ignore gold for this purpose.

At least until the return of a gold standard (don’t hold your breath), currencies are quoted as cross-rates.

In practical terms, this means that one currency cannot go “up” without some other currency going “down.” It’s a zero-sum game. It’s also like a roller coaster ride with steep climbs, scary plunges and sharp turns that nevertheless ends up back where it started.

EUR/USD did not move in a straight line from 80 cents to $1.60 and then back down again. In fact, there have been 10 reversals in EUR/USD of approximately 20% each over those 20 years.

The euro today is right at the $1.16 where it opened in 1999. It’s just like that roller coaster ride — lots of thrills and chills, but it’s back where it started.

The same is true for EM currencies versus the U.S. dollar.

There’s plenty of reason to be bearish on EM economies and the long-term prospects for their currencies. Yet the recent plunge in EM cross-rates to the dollar has been driven almost entirely by Fed tightening combined with interest rate differentials and perceived creditworthiness.

The Fed will have to reverse course soon, probably at their meeting in September. This does not mean the Fed will cut rates, merely that they will “pause” in the current course of rate hikes.

By the way, this is exactly what the Fed did in 2017; they raised rates in March, June and December, but took a pause in September.

A pause in rate hikes is a form of ease relative to expectations. Fed ease will weaken the dollar. When the dollar gets weaker, EM currencies must get stronger. That’s the zero-sum nature of cross-exchange rates. Getting into EM currencies now just as the Fed is announcing its most recent rate hike is an ideal entry point for the coming reversal and rally.

Here’s what Marcelo Perez of Alhambra Investments had to say on the subject of the dollar and emerging-market currencies recently:

Emerging-market currencies are down and the press coverage makes it sound like armageddon. In the 2015/16 crash this broad-based ETF of emerging currencies fell by over 20%. This latest pullback amounts to a little over 5%, or about the same as the euro drop. Such negative sentiment on such a small move might be a good opportunity for a contrarian.

How bad has it been lately for EM currencies?

The price action and sentiment have been awful, as revealed in the three charts for the Turkish lira, Indian rupee and Brazilian real. Yet it’s precisely these cross-rate collapses that make EM currencies attractive right now on prospects for a reversal.

Here’s the recent price chart of the Turkish lira (TRY) against the U.S. dollar: 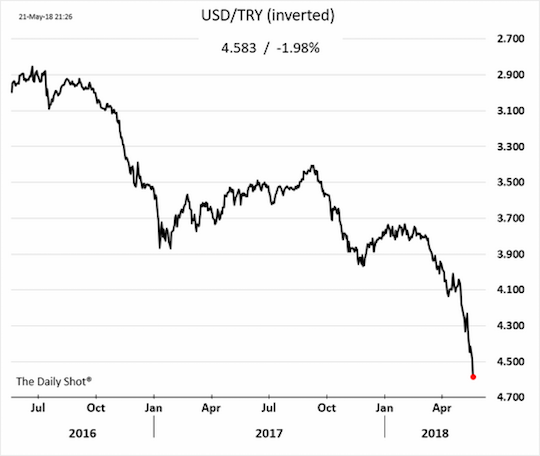 Here’s another recent price chart of the Indian rupee (INR) versus the dollar: 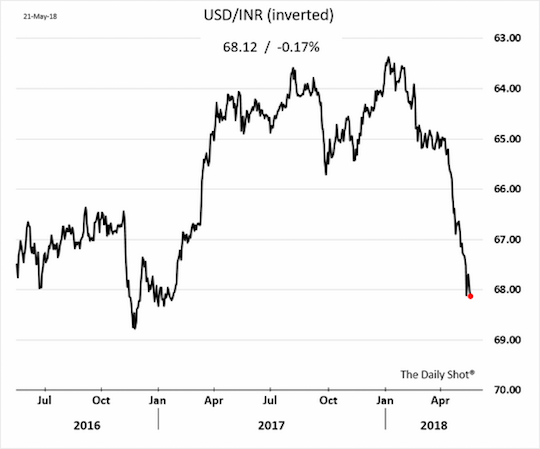 Finally, here a price chart of the Brazilian real (BRL) versus the dollar: 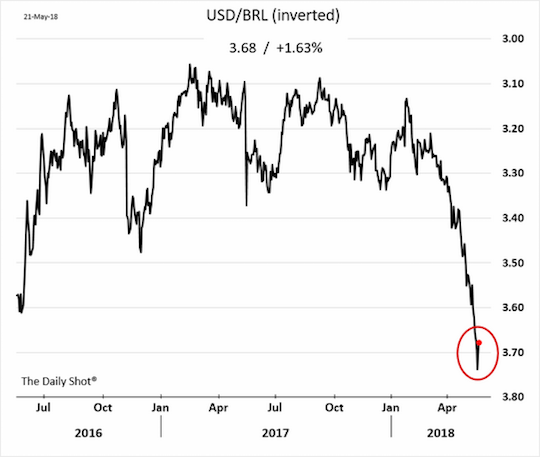 I could provide many other examples, but you get the point. EM currencies are in free fall versus the dollar. But, as explained above, currencies don’t move to extremes in a straight line.

The dollar might be stronger a year from now, but it looks set for a drop in the next six months as the Fed takes a pause in its interest rate hikes in order to assess the impact of monetary tightening so far.

When the dollar drops, EM currencies rally. It’s that simple.

With this EM currency rout now behind us and a Fed interest rate pause ahead, what do my predictive analytic models telling us about the prospects for EM currencies in the near future?

Right now EM currencies are oversold. This is due to unusual strength in the dollar due to Fed tightening.

Current monetary policy in the U.S. is completely unprecedented. The Fed is not tightening because of economic strength. They’re tightening because they need to raise rates and reduce their balance sheet to prepare for the next recession.

Raising rates into weakness has not been Fed policy since 1937. That policy ended in a severe recession and extension of the Great Depression.

Reducing the Fed’s balance sheet by over 50% is completely unprecedented. It has never been attempted in the 105-year history of the Fed.

Quite simply, the Fed has no idea what it is doing. The Fed is overtightening right now and does not even realize it. This means that easing is just a matter of time. And that easing is the signal for an EM currency rally.

Just to be clear, there is good reason to be highly negative on emerging markets over the next year or so. Debt levels are too high, foreign exchange coverage ratios are too low and the EM export sectors are highly vulnerable to a slowdown in developed economies and China.

Still, nothing moves in a straight line. The fact that EM economies and stocks might be weaker next year does not prevent a short-term reversal rally in EM currencies starting now. 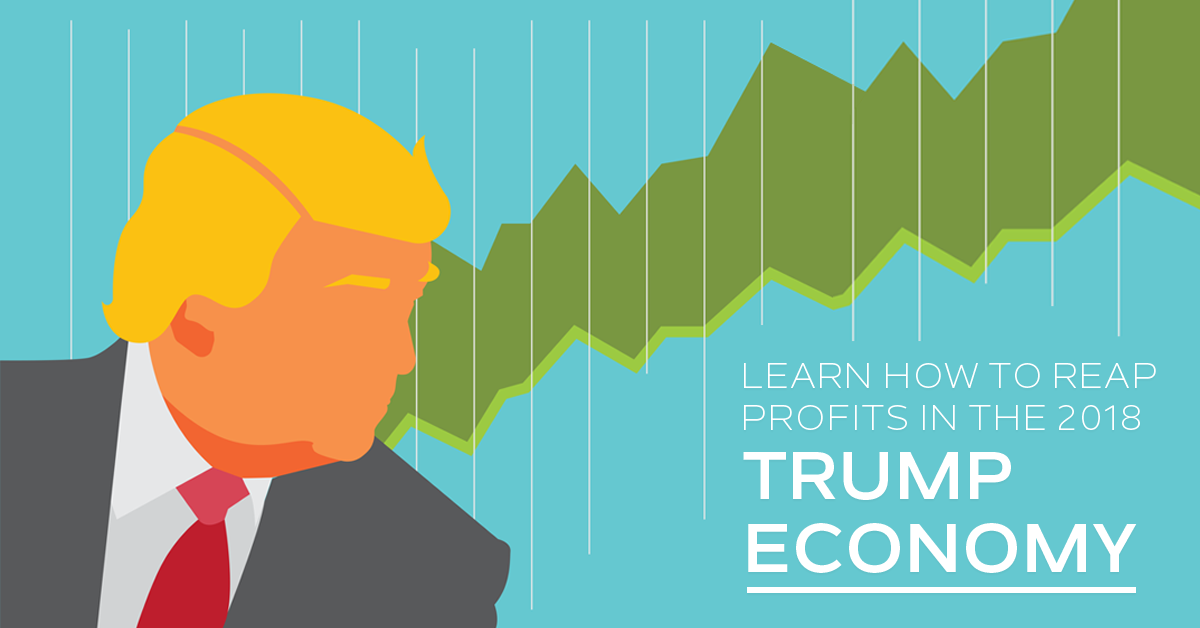 James G. Rickards is the editor of Strategic Intelligence. He is an American lawyer, economist, and investment banker with 35 years of experience working in capital markets on Wall Street. He was the principal negotiator of the rescue of Long-Term Capital Management L.P. (LTCM) by the U.S Federal Reserve in 1998. His clients include institutional investors and government directorates. His work is regularly featured in the Financial Times, Evening Standard, New York Times, The Telegraph, and Washington Post, and he is frequently a guest on BBC, RTE Irish National Radio, CNN, NPR, CSPAN, CNBC, Bloomberg, Fox, and The Wall Street Journal. He has contributed as an advisor on capital markets to the U.S. intelligence community, and at the Office of the Secretary of Defense in the Pentagon. Rickards is the author of The New Case for Gold (April 2016), and three New York Times best sellers, The Death of Money (2014), Currency Wars (2011), The Road to Ruin (2016) from Penguin Random House.